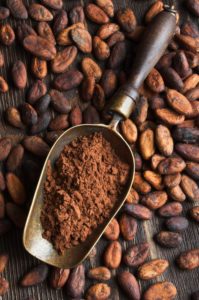 The effect of roasting process conditions on the polyphenol content in chocolate. The roasting process is a significant step in cocoa bean processing. Heating of coffee beans results in a variety of changes as regards the taste, colour and texture of the product.

However, these changes are also accompanied by undesired reactions that reduce the content in bioactive compounds such as polyphenols. It is therefore important to select the appropriate roasting conditions to limit these negative effects.

In this context, a recent study, carried out by a group of Polish researchers (Żyżelewicz et al., 2016), assessed the influence of processing parameters  (temperature, roasting time, air flow rate and relative humidity) on the kinetics of changes in the content of phenolic compounds in whole beans and beans fractions of different particle size. Furthermore, the content of these compounds was also quantified in the final product (chocolate).

The analysis, carried out by LC-MS/MS (Liquid chromatography coupled to tandem mass spectrometry), showed that, in general, the degradation of polyphenols was lower in presence of increased relative humidity. It has also been observed that, irrespective of the roasting conditions applied, the most sensitive compounds are epicatechin and procyanidin B2.

On the contrary, the content of catechin generally increases as a result of the process. Even the size of the bean fractions played a significant role and, in general, the smaller the particles, the greater the degradation of compounds. Finally, the process of chocolate preparation further influenced the concentration of phenolic compounds; however, the loss of these substances was not high.

New geographic traceability system based on the elemental analysis. Cocoa derivatives are a very interesting class of products, not only for their sensorial properties, but especially for their healthy and antioxidant properties.

Many of these features depend on the geographic origin of the cocoa itself. In this context, a recent research carried out by a group of Italian researchers (Bertoldi et al., 2016), proposed a system of geographic traceability based on the elemental profiles of cocoa beans. In particular, to develop this model, the composition of 56 elements was analysed (macro, micro and trace elements) in 61 cocoa beans produced in 23 different countries (Africa, Asia and South America), using inductively coupled plasma mass spectrometry (ICP-MS).

The results indicated that only 29 elements out of the 56 analysed effectively provided an optimal discrimination of the samples. The system based on the use of the selected elements, achieved 100% of correct reclassification of the beans according to their geographic origins. Furthermore, it was observed that, by removing heavy metals, whose values are potentially influenced by environmental pollution, the statistical model is able to correctly classify the 97% of the samples.

The same traceability model was tested on 13 different commercial samples of dark chocolate. Also in this case the model proved capable of tracing back the geographical origin of products, however less effectively (only 77% of the products has been classified correctly) than observed in the tests with the beans.

In conclusion the authors argue that the results so far obtained are certainly promising, but further studies are still needed to improve the reliability of the model when applied to cocoa derivatives.