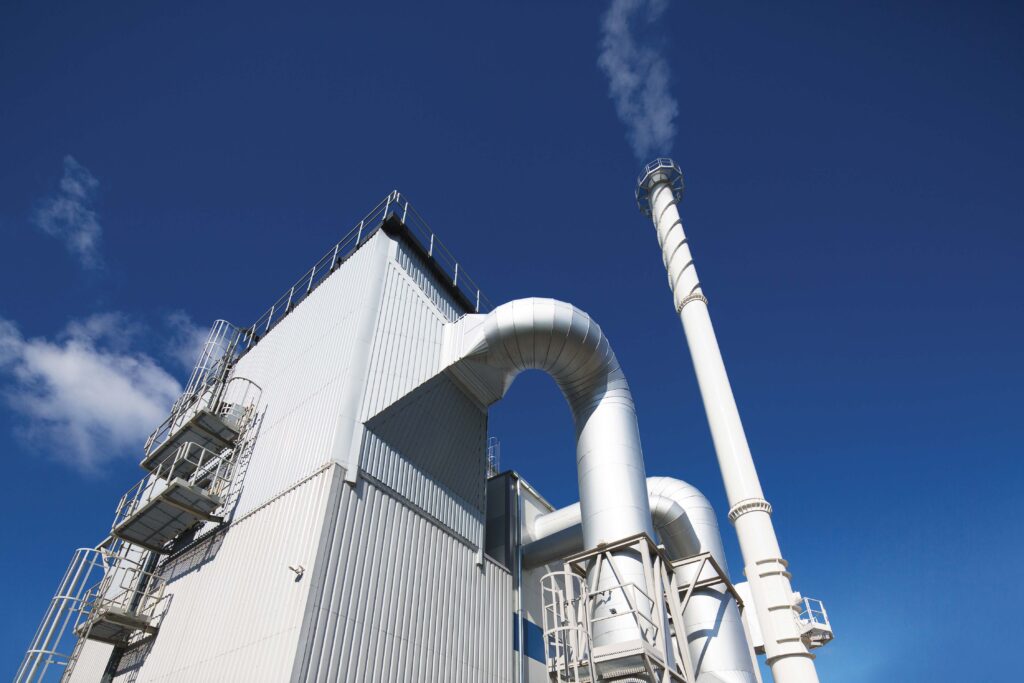 For the food industry, energy efficiency upgrades mean a reduction in costs and environmental impact. There are several solutions on the market: Burners, economizers, capacitors and ORC modules. The importance of energy diagnostics and co- and trigeneration plants.

The food and beverage industry needs large quantities of heat: For air conditioning, thermo-regulation of working environments, steam production and refrigeration, etc. There are several steam generators on the market. The selection of the one that best suits processing needs requires a study that considers the entire production structure, assessing several factors, the most important of which are the working pressure and the producibility, i.e. the steam generation capacity measured in tons/hour, which for food companies usually reaches up to 20 tons/hour. Low pressure generators reach up to 1 bar, medium pressure generators up to 15 bar and high-pressure generators over 15 bar.

Food and beverage companies are major users of steam, also as an ingredient. There are many reasons: Steam is sterile and has a thermal healing effect, thus minimizing the health and hygiene risks due to the possible presence of potentially pathogenic micro-organisms. It also minimally alters the chemical, physical and organoleptic characteristics of food, while increasing its shelf-life. Another major advantage is the uniform action over the entire product being treated.

Steam used in direct contact with food must be free from undesirable substances and micro-biologically pure. Different is the case for steam used as indirect heating fluid. In this case, rather than the quality of steam, it is important to check the integrity of the system to avoid possible contamination and corrosion phenomena. The most widely used boilers in the food industry are fire-tube steam or water-tube generators. Fire-tube steam generators treat large volumes of water, allowing for great flexibility in use, simpler management and reduced maintenance.

Gas-generated heat is transferred by thermal conduction to the walls of the pipes and from them to the water which becomes steam. They allow to meet very high steam demands in a very short time. The steam produced is of high quality having a saturation value close to the unit: A virtually “dry” steam saves energy by reducing boiler returns via steam traps in the system. In water-tube generators, water flows into the pipes and is heated directly by the heat produced by the burner. Food companies may opt for methane-gas condensing boilers to produce hot water, sometimes in conjunction with solar thermal panels.

The condensing boiler recovers and exploits the heat contained in the exhaust fumes and water steam, converting it into energy. It is therefore possible to harness energy, which should normally be dissipated. Modern steam power plants and condensing boilers are equipped with storage and degassing systems, pressure reduction systems with particular attention to energy saving and environmental protection, thanks to energy-efficient equipment enabling the plant to reduce operating costs.

In any case, the insulation must be such as to prevent heat loss and to maintain a high efficiency of up to 96%; therefore, not only the boiler body, but also the smoke box, doors and hydraulic connections are insulated. Energy recovery systems allow heat to be recovered, which would otherwise be dissipated by exhaust fumes and condensate. Finally, water treatment systems reduce the risk of scaling and corrosion, as required by UNI EN 12953-10 (for smoke pipe generators) and UNI EN 12952-12 (for water pipe generators).

Technical, energy and logistical information, such as required power, production and operating pressure, efficiency, NOx emissions, shall be considered when selecting the steam generator. A growing number of food companies are moving away from water-tube steam boilers or the more obsolete diesel power stations to medium- and high-pressure smoke-tube steam generators and solar thermal condensing boilers, as well as cogeneration and trigeneration plants, that can simultaneously supply electricity and heat. 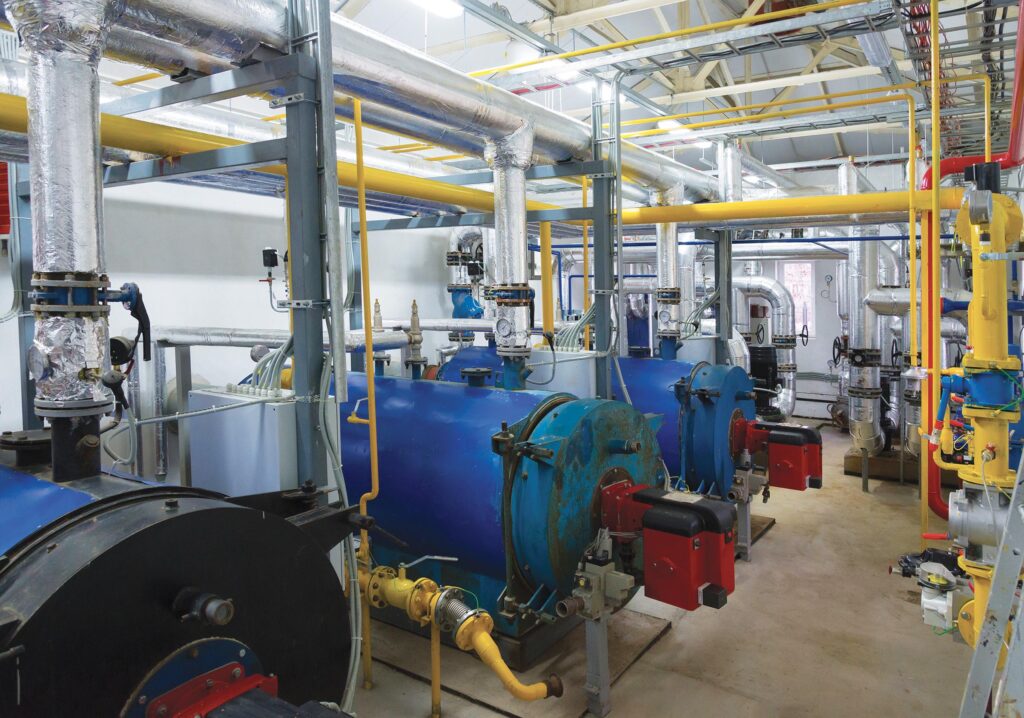 Food companies can choose a variety of energy efficiency upgrades by relying on professionals in the sector. On the market there are generators offering yields of 95-96% thanks to the provision of an economizer for the recovery of thermal energy and oxygen-controlled burners, in accordance with Legislative Decree no. 15 November 2017 183 (modification of Legislative Decree 152/2006), according to which – for power outputs greater than 1160 kW and for plants with a rated thermal input greater than 1500 kW with generators with a heat output greater than 750 kW – a combustion control system is provided for the automatic regulation of the air-fuel ratio.

The function of the burner is to burn solid, liquid or gaseous fuels by mixing them with the oxygen of the air. There are burners with a block structure, to allow easy adaptation to different needs and flexibility for multiple uses. A parameter to be considered for the operation of burners is the fuel used, which can be gas, oil, methane, liquid gas. Gas burners can be forced-air burners, if air is mixed with gas before entering into the combustion chamber, or aspirated-air burners, if it is sucked in afterwards. Mixed or bi-fuel burners are available on the market, that is, capable of operating with both gas and another liquid or gaseous fuel.

As well as offering greater convenience, industrial bi-fuel burners provide continuous service, which is popular with food companies, who sometimes work 7/24. Fire-tube burners can also be equipped with inverter technology, which further saves and reduces the emission of spent gases. The inverter, in fact, ensures that the required air flow is provided, without wasting energy and with lower energy costs. Other devices save energy by increasing the output of the generator. An example of this is the economizer that exploits the fumes heat to preheat the boiler feed water.

Its implementation may lead to a 5% increase in plant performance. The condenser, on the other hand, is an exchanger that recovers low-temperature heat from fumes condensation and can be mounted downstream of the economizer, increasing efficiency by 7%. Many generators with the right technology also allow to avoid continuous supervision of a qualified operator. Hardware and software are capable of intelligently managing heat generation systems for maximum efficiency and conscious use of energy in the systems themselves.

The food industry uses large amounts of heat for the different production processes. Heat production, in the form of hot water and steam, serves not only for the heating of premises, but also for essential industrial processes such as the cooking of raw materials and foodstuffs, pasteurization and sterilization. However, some of that heat is lost in conventional steam systems. The most modern installations can recover heat at temperatures even below those of boiling water.

Heat recovery can take place at several points on production lines, thanks to the installation of ORC (Organic Rankine Cycle) modules, i.e. systems based on a closed-loop thermodynamic cycle for the generation of electrical and thermal power. They are used to produce energy from low to medium temperature heat sources (typically between 80 and 350°C), which would otherwise be dispersed. Organic substances are used, instead of steam, such as working fluid.

This is because, with a lower boiling point and a higher steam pressure than water, they are more efficient in producing electricity from low-temperature sources. Different ORC modules, in series or in parallel, and organic substances with different thermal levels can be used in order to maximize efficiency. There are several solutions on the market that are suitable for different food industries. In biogas plants, for example, it is possible, with ORC modules, to recover heat from the combustion fumes and from the cooling water. 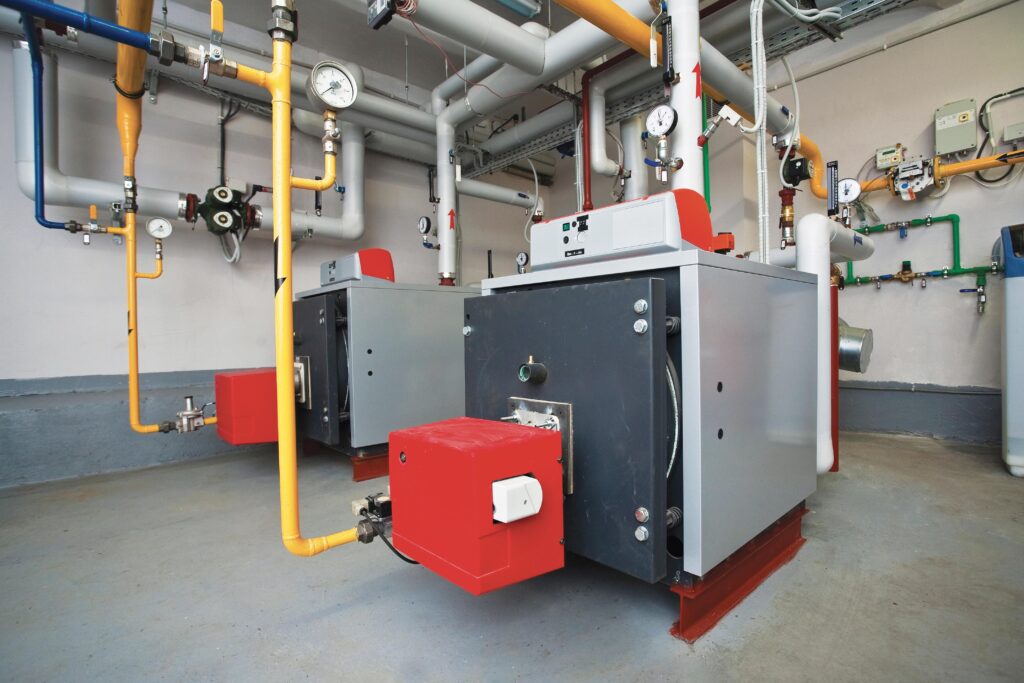 Important for energy efficiency is also the energy diagnosis, according to Legislative Decree 14 July 2020, n. 73, implementation of Directive (EU) 2018/2002 amending Directive 2012/27/EU on energy efficiency. The EU Directive is part of a package of EU-wide legislation – known as the Clean Energy Package – which sets the regulatory framework for achieving Europe’s new 2030 energy and climate targets.  The directive updates the rules on the obligation of large companies and energy-intensive companies to carry out energy audits.

The energy diagnosis aims to identify interventions on both plants and buildings, in order to reduce consumption. The interventions are ranked according to an order of priority, which allows the company to opt for the most advantageous interventions both from the economic point of view of the investment and in terms of cost/benefit for a greater economic return on the investments.

The energy sources used for heating and to produce hot water and steam, as well as the specifications of boilers and all energy-producing plants, are also part of an energy diagnostic study. A correct path of energy efficiency means a reduction in costs and environmental impact for the food company.

More and more food companies rely on cogeneration and trigeneration plants. Cogeneration allows to produce both electricity and heat from the same plant, exploiting the heat from the dissipation of an endothermic engine. The recovered energy can be reused in various industrial processes. Cogeneration saves natural gas, which is the primary source of energy, for an increase in plant efficiency and a significant reduction in consumption.

Another important benefit is the reduction of emissions of harmful substances due to combustion, such as nitrogen oxides, sulphur, carbon monoxide, compound hydrocarbons, etc. The most widely used in the food industry is turbine cogeneration, because it produces more steam-generated heat, used for pasteurization, for example. Cogeneration saves fuel, releases less CO2 into the environment, uses clean fuels, improves the efficiency of the energy system. In the food industry, in addition to cogeneration, trigeneration is increasingly used.

In addition to producing electricity and heat, it also produces refrigeration energy, which can be used to maintain the temperature of certain rooms or for production processes that require low temperatures. Cogeneration plants can be combined with lithium bromide absorbers, which produce cold water at a temperature of not less than 5°/6°, thanks to the waste heat of the engine. Alternatively, ammonia absorbers may be used, which, unlike the former, reach temperatures below zero.

The main components of this type of absorber are: The desorber, the condenser, the evaporator and the absorber. A mixture of water and ammonia is used. Ammonia acts as a refrigerant, while water acts as an absorbent. In the desorber, hot water, steam or diathermic oil, as appropriate, are used to evaporate ammonia and separate it from water, which will condense in the condenser, transferring heat to the cooling water. Liquid ammonia evaporates in the evaporator, cooling the refrigerator, which may be either glycol water or ammonia. The cycle starts again, with the vapour of the refrigerant being absorbed by the water in the absorber, recomposing the solution of water and ammonia which will be pumped to the desorber and so on.