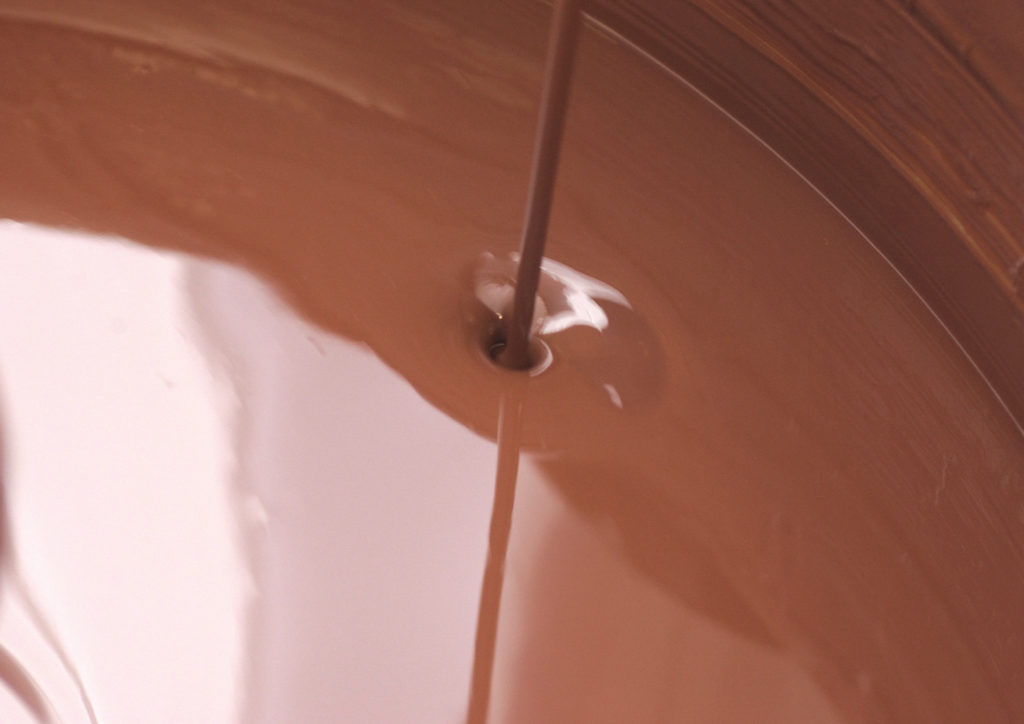 Chocolate, a timeless delicacy, requires just a few ingredients: sugar, cocoa butter and cocoa powder or paste. It can be added to milk, to obtain milk chocolate; or by removing the cocoa powder, it is possible to obtain white chocolate. The technological process has several basic phases, as for instance the roasting, refining, conching and tempering.

Roasting is used to release the aromas of cocoa beans. This process is important because roasting contributes to reduce acidity and astringent substances present in cocoa beans. Furthermore, the heat causes a denaturation of the enzymes, which can adversely affect the organoleptic properties of cocoa butter.

Cocoa beans can be roasted as whole beans, but in this case the product will be less homogeneous; or they can be crushed in grain for a more uniform roasting; or, even better, they can be transformed into a paste with better results, but with higher costs. Some studies have demonstrated that keeping the cocoa roasting temperature below 140°C best preserves the initial concentration of flavonols.

In addition, at lower temperatures the resulting product has a lower acidity, that allows to obtain a product with a lower total acidity. In order to preserve all the nutritional properties of cocoa, and especially its thermolabile components, even raw chocolate is available on the market; raw chocolate is processed at temperatures that never exceed 42°C. Instead of roasting, cocoa beans are dried slowly in a controlled atmosphere.

Even during the fermentation process, which provides constant mixing, aeration and drying of the beans, the temperature never exceeds 40°C. In this particular type of process, the refining may be performed using a ball mill that, thanks to the friction produced, causes the temperature to rise to 45°C, with consequent melting of the cocoa butter and separation of this from the cocoa paste. The ball mill is equipped with a water cooling system, used to keep a constant low temperature and to preserve the aromatic components of cocoa.

The suitably processed mass is transferred by scrolls to the refining unit. If crystal sugar is used, a pre-refining process is required in order to reduce the particle size of sugar between 80 and 120 micron, and obtain a more compact mass thanks to the passage between two or three water-cooled rollers of variable length and diameter.

This step is not required if icing sugar is used. As the pre-refiner, the refining machine is equipped with rollers – typically 5 – whose distance is electronically adjusted in order to obtain the desired fineness, also thanks to the combined crushing and stretching effect. The chocolate film is then detached from the roller surface by means of blades. The refining process can be also carried out by means of a ball mill, i.e. a double chamber roller used for heating and cooling, inside which steel balls are moved by a central shaft equipped with special arms or disks. Ball mills are used to produce cream spreads, anhydrous pastes for the production of ice cream, pralines and soft chocolates.

They can be equipped with a chiller to control the heat produced by the friction of the balls, thus protecting the organoleptic properties of the product. The refining cylinder is temperature controlled to prevent residual fats to solidify between the balls during work stops. The line productivity may vary depending on the raw materials used and the percentage of sugar in the recipe. Again, by replacing crystalline sugar with icing sugar, the refining time is significantly reduced with relevant increase in production.

After the mixing and blending of the basic ingredients, chocolate paste must be finely ground, so that sugar and cocoa particles are reduced to dimensions not greater than the sensitivity threshold of taste buds. To obtain the desired creaminess, chocolate paste is processed in conching units, that mix the product for a controlled time at a controlled temperature. After that, the chocolate is stored in heated tanks (47-50°C) equipped with stirrers, waiting to be processed.

It is essential that chocolate is constantly mixed inside the storage tanks to preserve the homogeneity, composition and organoleptic properties of the product. The tanks are provided with level and temperature controls. Conveying systems that maintain a constant temperature transfer the chocolate to tempering machines, which cool it to 26-28°C and then heat it at 29-32°C, so that cocoa butter can crystallize in its stable form, and chocolate acquires its important technological properties, as easy de-moulding, velvety and homogeneous texture, and gloss, next to a long shelf-life.

Some tempering units allow adding of hazelnut chips, cocoa grué and other products inside the chocolate for its flavouring. Depending on the processing it will undergo, chocolate is then moved to depositing, decorating, modeling machines, always maintaining a hygienic environment, without inclusion of liquids, air or foreign bodies, in order to prevent product contamination. 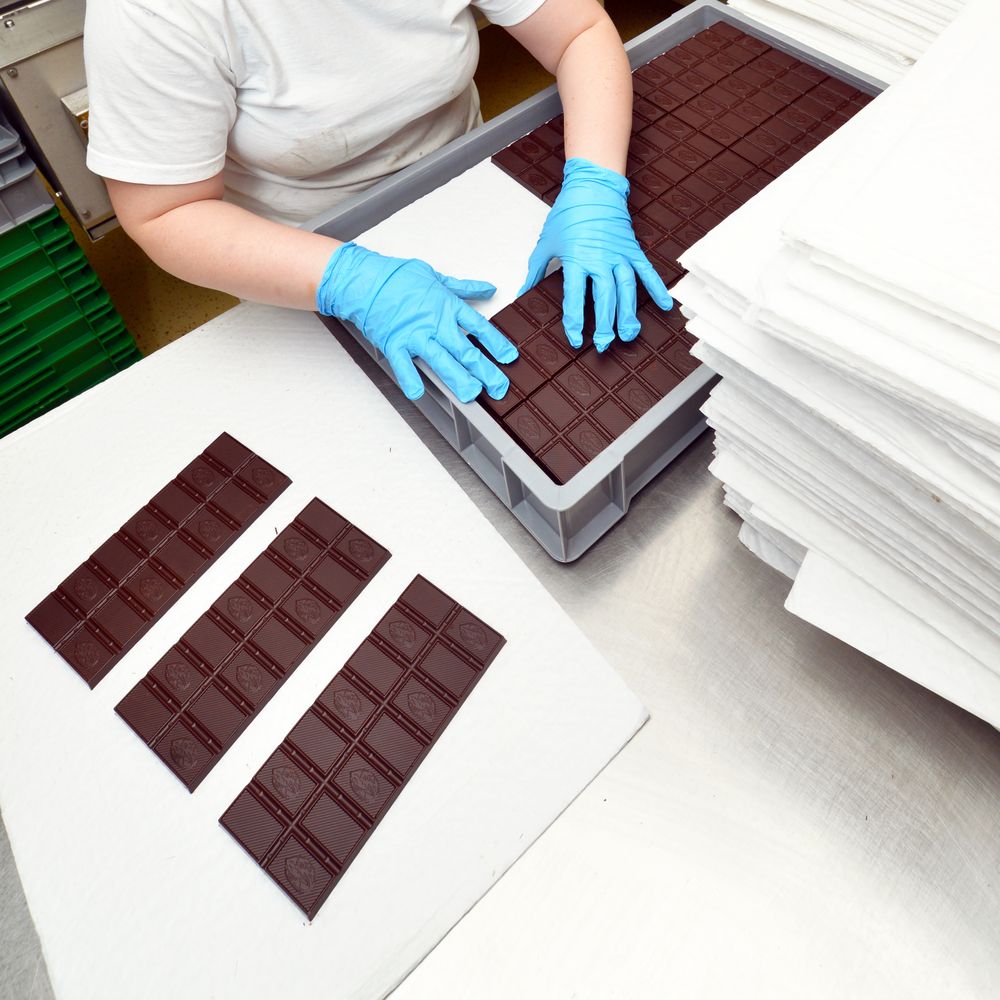 Cooling tunnels are used for drying chocolate and moulded chocolates placed on the conveyor belt. The products are cooled by convection with modulated temperature and airflows, with electronic temperature and humidity control. The product enters directly into the cooling tunnel consisting of modular elements, for easy inspection, cleaning and maintenance.

Ventilation is opposite to the direction of travel of the product, for an optimal cooling. The tunnels are available in different lengths. The total length and the useful width of the conveyor belt varies according to the characteristics of the product to be handled. Plastic or metal net conveyors are more indicated for moulded chocolates, bars, hollow products.

Some tunnels feature independent cooling units, and independently regulated temperatures. Even the conveying speeds of the tunnels are variable according to their length. At the beginning and at the end of the tunnel there are two automatic systems for centering and guiding the belt. Product scraps are collected and conveyed to an extractable drawer, and recycled.

Total automation and reduction in consumption

Chocolate processing lines are highly automated, and equipped with control systems on all processing units, by means of dedicated hardware and software as well as scalable supervision and control systems (SCADA), through which operators can interact with the lines and check their correct operation.

Automation requires the implementation of a system that collects all production data from the PLCs of the various systems, and can handle and save the various recipes, failures, machine stops, as well as all information concerning production, in order to ensure the complete traceability of the final product. Automation systems for the chocolate industry, and for the food industry in general, must be characterized by top reliability, as they handle food products, for which safety is a basic pre-requirement, and production processes that can run on a 24/7 basis.

The possibility of dimensioning and configuring ad hoc the different machines of the system, allows considerable energy savings.  Many conching machines for liquid chocolate, for instance, are equipped with evaporation towers that ensure the quick removal of unwanted volatile substances and a radical reduction in processing times and energy consumption. Energy consumption can be further reduced if the company implements cogeneration or trigeneration systems. Cogeneration, also called CHP (Combined Heat and Power), is a process of combined production of heat and power.

Cogeneration plants can reduce the amount of fuel used in power generation processes, with a reduction in energy consumption of between 35 and 40%. Furthermore, even the environment benefits of this process, because it reduces greenhouse emissions. Even more performing is the trigeneration system (CCHP Combined Cooling, Heating and Power), the simultaneous production of electricity, heat and cooling all from one single source. Thermal energy is mainly used for the production of chilled water for industrial air conditioning and refrigeration through absorption chillers.

Small chocolate manufacturers can select multi-purpose and space-saving systems. There are small lines for chocolate preparation, integrating mixing, pre-refining, refining and single-shaft conching machines. There are also systems that allow the mixing of ingredients of different consistencies, whether solid or semi-dense, to obtain different products, such as chocolate filled with creams or products containing different granular ingredients, simply by varying the setting of the recipes from the operator panel.

In order to reduce spaces, there are dosing machines equipped with double tank, designed to mould one product and its filling by one dosing. The two tanks operate at different temperatures, allowing the dosing of different products. There is a wide range of cooling tunnels on the market designed for low space requirements.

Multi-function tunnels, for instance, function as enrobing lines for pralines, and other products in one direction, and in the opposite direction, on a secondary level of handling of the product inside the chamber, the tunnel allows for cooling, with considerable advantages in terms of space and increased productivity. For work areas with space constraints, as in small and medium artisan production, products can be cooled with excellent processing results.

The quality and sustainability of packaging in the wine industry