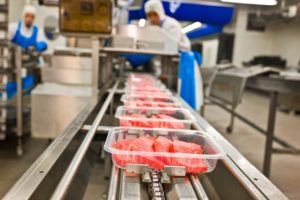 Packaged meat is usually subject to lipid oxidation, which may adversely affect the overall quality of food, as taste, flavour, nutritional value and development of toxic compounds.

There are different methods to prevent oxidation, either by adding antioxidants directly to the food or by protecting the food trough the packaging technology. Usually the second option is preferred. In the meat sector modified atmosphere packaging (MAP), where a mixture of gas is introduced into the package to replace oxygen, is widely used.

Over the last years, active packaging materials have gained in importance. These materials in theory provide good antioxidant performance, however their effectiveness is highly disputed, especially since no migration can occur when they are used in contact with food.

A recent proposal relates to the use of  antioxidants acting as scavengers of free radicals from the package headspace, i.e. in the portion of compressed air between material and food, so that no migration can occur to the meat. Olive leaves extract shows strong antioxidant properties  due to the presence of major phenolic compounds acting as free radical scavengers. This material has been applied to packaging materials used for food simulants, and therefore it is very attractive even for fresh meat. In this context, M. Moudache et al. (Food Chemistry 229, 2017, 98) have developed a new antioxidant multilayer material composed by two LDPE layers (low density polyethylene) and containing an extract of olive leaves. Each LDPE layer is 30 μm thick, i.e. 30 millionth of a meter.

This material has been used for the packaging of fresh minced pork meat and kept at 4°C for 16 days.For the preparation of the multilayer material, the olive leaves extract has been incorporated in an aqueous dispersion containing an adhesive substance used to anchor the LDPE layers.The antioxidant extract has been added to the adhesive in four different concentrations (2%, 5%, 10% and 15%).

The adhesive has been spread on the whole surface of the first LDPE film, before applying the second plastic layer.The oxidative deterioration of the meat packaged with this new multilayer material has been analysed using to different methods: the TBARS test, i.e. thiobarbituric acid reactive substances, and Raman spectroscopy.Both methods have been used at the same time for the following reason.

The reactive substances of the thiobarbituric acid (TBARS) are formed as a by-product of fat degradation; typically, this test identifies the presence of malondialdehyde (MDA), which is one of numerous products formed by lipid oxidation. However, the interpretation of the response of the TBARS essay when studying lipid oxidation requires caution, because only certain lipids generate MDA by oxidation; and MDA is neither the by-product of the final lipid decomposition nor a substance generated exclusively by means of lipid oxidation.

Therefore, other data on fat decomposition are necessary, which can be obtained by means of Raman spectroscopy. This approach provides information on the molecular structure of the material as well as on the interactions that are established therein. It is a non-destructive essay, providing answers in a short time, does not require special conditions for the measurement, and can be carried out directly on the sample without any preparation.

Its non-destructive property, and the possibility of carrying out measurements on site, make the Raman technique very effective for the study of materials in general. From the operational point of view, for the TBARS test, meat samples have been dispersed in an aqueous solution of trichloroacetic acid, and then added to an aqueous solution of thiobarbituric acid.

The mixture has been kept at 97°C for 20 minutes, then cooled to room temperature, and the absorbance has been measured at 532 nm. For the Raman spectroscopy, fat has been extracted from meat samples. To this purpose the sample of meat has been accurately weighed and extracted by sonication with a mixture of diethyl-ether/n-hexane.

At the highest concentration of olive leaves extract (15%), TBARS values in meat samples were numerically lower at all storage times, with 27% inhibition of MDA formation. In parallel, the Raman spectra of fat have shown that active films containing olive leave extracts have reduced oxidation of meat fats. In particular, films with 15% and 10% of extract have shown the best antioxidant effect, with one oxidation on the 15th day, corresponding to 3.44% and 9.64% of oxidation respectively, followed by 5% of extract (12.45%) and 2% of extract (17.48%).

These data are far better than those obtained with non-active (control) film, resulting in 44.97% oxidation. Consequently, Raman spectroscopy confirmed that the antioxidant effect increases with the concentration of a natural extract integrated in the multilayer plastic. In summary, this study has demonstrated that the active packaging containing olive leaves extract immobilized in the multilayer LDPE film is very efficient to protect the meat from oxidation, and it could extent its shelf-life for about two days.

This is a major advantage over conventional packaging materials. Moreover, the use of this material is a sustainable way to give an added value to vegetable waste. In addition, it has been demonstrated that Raman spectroscopy is an efficient technique for the quick and direct evaluation of lipid oxidation and can replace classical methods used to monitor the lipid oxidation.

The quality and sustainability of packaging in the wine industry