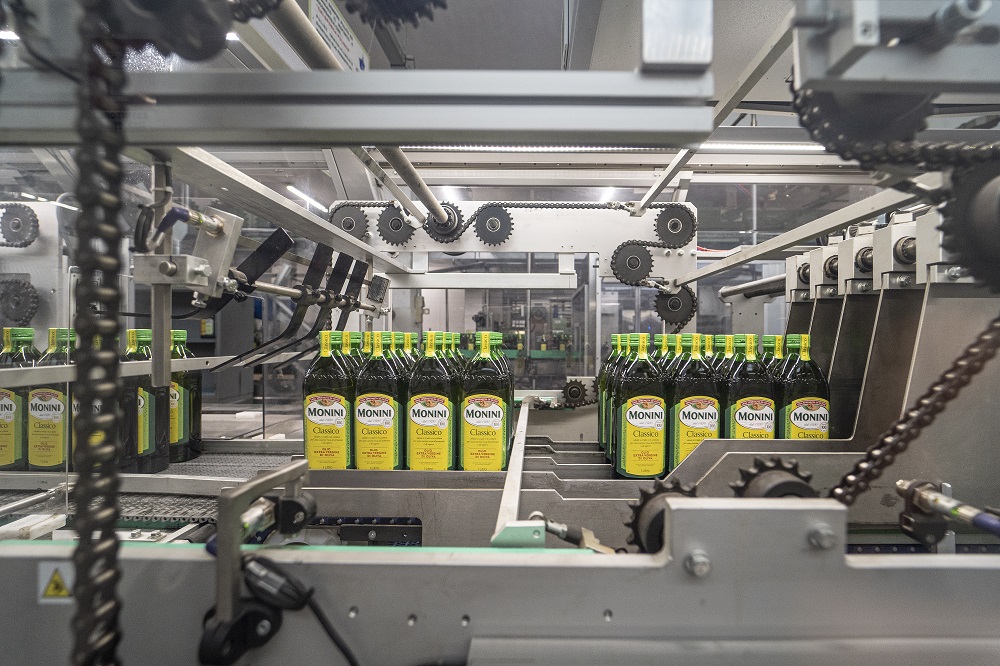 A century after its foundation, Monini’s success continues under the guiding light of the passion and ability of the “oil family” to take optimal care of the product; the updating of the packaging lines to this end, is continuous and is guided by the principles of quality and respect for the environment.

It was 1920 when Zefferino Monini, the sixth of eight children of a farming family, started a small business selling and distributing oils and cured meats in Spoleto (PG) after working as boy and an experience in the management of a military kitchen during the Great War.

Ten years later, in 1930, Zefferino Monini Olio di Oliva was born, an entrepreneurial adventure destined to remain on the list of successful Italian food companies. Although at that time the consumption of extra virgin olive oil was limited to a privileged group of the population, the company’s expansion was rapid, and Monini began to market the product outside Umbria, writing an important page in the history of the oil market in Italy.

Zefferino’s commercial intuition was accompanied by an obsession for quality, at a time when checks were non-existent and adulteration was a sort of custom. He was personally in charge of control and sales and, after the setback of the dark years of the war, he made sure that the oil industry was on its way again along the Peninsula, also thanks to the introduction, alongside the traditional demijohns, of the first glass bottles, destined to change the existing marketing system.

The economic boom sees the entry of the second generation into the company: Sons Nello, Giuseppe and Paolo bring new life to the company, leading it towards a more managerial management. Giuseppe worked alongside his father in finding the raw material and Nello, who moved to Rome, opened a warehouse to better satisfy the important Lazio market; Paolo, on the other hand, developed an increasingly important interregional presence, so much so that in 1966 the company deserved the prestigious Mercurio d’oro quality award, awarded to companies following an evaluation that took into account commercial correctness, entrepreneurial spirit and professional reliability.

In 1973 the famous slogan “Monini: a freshly squeezed olive juice” was coined, which still today, to most, sounds familiar; at the beginning of the 80’s, coinciding with the evolution of the GDO, the company, with 60 employees and a turnover that at that time reached 60 billion lire, assumed a more appropriate corporate structure, passing from SAS to SpA. A few years later, in 1988, Findim – holding company of the Fossati family, which controls Star – acquired 35 % of  Monini’s shares, giving life to an alliance destined to last for many years and to bring new stimuli and managerial culture to the company.

In the same year, the management of the company passed to Zefferino and his sister Maria Flora Monini, grandsons of the founder and sons of Giuseppe, who had been working for the company for years. The third generation takes the extra virgin olive oil from Spoleto out of the national borders – in 2000 Monini North America Inc. was born – bringing back, at the same time, “the family oil” entirely in Monini’s hands: after 14 years of alliance, in fact, in 2002 Zefferino and Maria Flora decide to buy back the share sold to Findim.

The new millennium sees, on the one hand, a consolidated international presence – in 2008 Monini Polska was also founded – and, on the other hand, the production of oil is flanked by that of another national jewel, the Balsamic Vinegar of Modena. Today, 100 years after its foundation, Monini is a company with a turnover of 144 million Euro, which employs 138 people, markets in more than 60 countries around the world – where it achieves 44% of its turnover – and produces an annual average of over 30 million liters of oil, of which 84% extra virgin, continuing to remain at the top and among the leading brands in the market in Italy in the EVO segment

Two souls for the same enterprise

“Our company is based on the artisan tradition of “know-how” and quality, which has its origins in the green heart of Italy – declare the owners, Maria Flora and Zefferino Monini – but it is also a joint stock company specialized in the production and marketing of extra virgin olive oil in over 60 countries: Tradition and modernity, strong local roots and international vocation are the two souls who coexist in our company, responsible for having made extra virgin olive oil known to Italians and still committed to making it known and appreciated in the rest of the world, while maintaining a sartorial vocation.”

Investing in innovation was one of the crucial choices made by Monini, whose current packaging lines – built according to the principles of quality and respect for the environment – are the result of a continuous updating of the plants over time. There are seven packaging lines, in total, diversified according to the size of the container and the nature of the packaging material: five of them are dedicated exclusively to filling in glass bottles, the sixth line is reserved for cans and PET bottles, and the last for bag in box containers. Their production capacity ranges from 12,000 pieces per hour for the fastest line up to 1,500 pieces per hour for the more flexible one.

Special attention is paid to process hygiene, taking care of the preventive cleaning of the containers and carrying out the blowing with filtered air treated with activated carbon; by means of a special machine, equipped with a pair of cameras that rejects defective or contaminated pieces, the bottom and the mouth of the bottles are inspected. Only at this point the filling and capping are carried out.

The control of the process continues by verifying the conformity of the capping and filling level, always by means of a camera; once this stage is completed, the labeling and the final verification of the bottle is made, then the palletized product is stored in a gravity warehouse, using laser guided shuttles. “We strive for the highest quality through a continuous and constant renewal of packaging machines and through the inclusion of downstream controls of the main processes, such as the numerous inspections with camera – explains Paolo Moscati, Production Manager of Monini SpA.

Over the last few years, we have relied on Alfatek for level filling, GFT Comaco for level filling and Kosme for gravimetric filling; all monoblocs are completed by Arol cappers, while the free standing cappers are from Clean Pack. For the labelling we turned to PE Labellers and Makro, while for the cartoning we have combined Baumer and Novopac machines; the lines are completed by Italpal depalletizers of the Novopac Group. As for the vision systems, we have been using FM Vision machines for checking empty containers, labelling and marking for a long time, and more recently we have installed data matrix code readers at the output of the labellers to prevent label mix-up problems.

When we need to process small batches of special bottles – continues Moscati – we use a line supplied by Polaris Automazioni, which is extremely flexible and adaptable to different shapes: this monobloc includes the blowing, filling and labelling phases. Last year, in co-operation with LA Inox in Spoleto – with which we had previously automated the entire tank fleet – we also invested in doubling the storage capacity of the oil produced.” 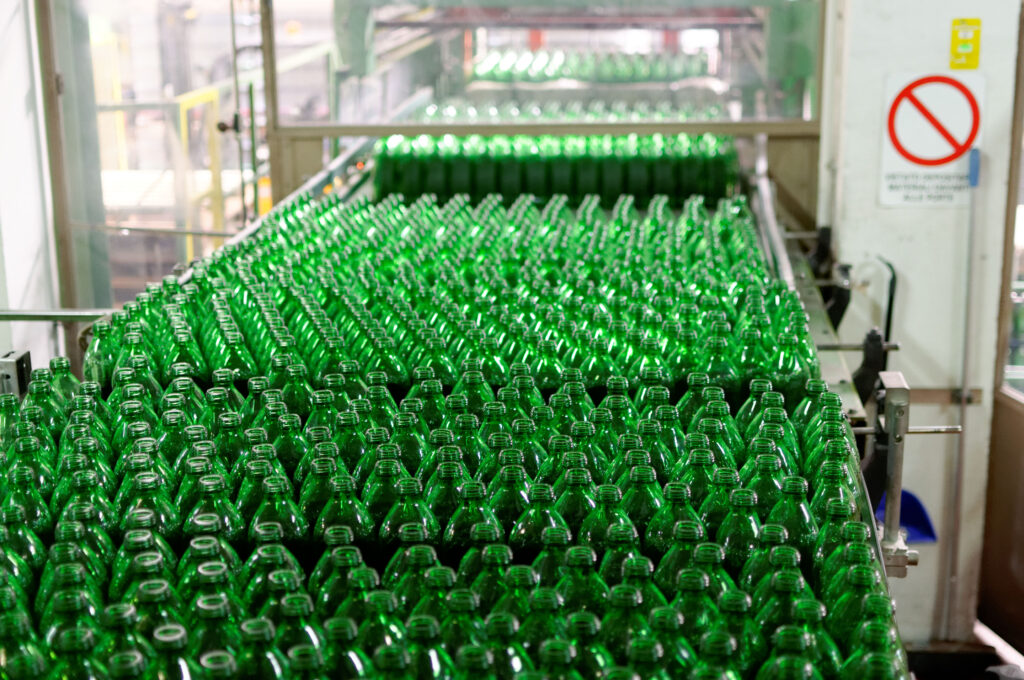 Monini’s dream is to retrace, with extra-virgin olive oil, the same course undertaken by the other noble product of the Italian countryside: wine. A path that leads to the understanding and knowledge of oil and the enhancement of high quality. “Our company is investing a lot in this direction – the owners clarify. By 2030, for example, we will certify 100% of our products of Italian origin according to the criteria of the High Quality Consortium CEQ; however, it is necessary to define a new regulation that codifies high quality and that is immediately recognizable by the consumer through a trademark.

Looking at what we have achieved in the past, if we were to do it all over again, we would not change much; the present, on the other hand, calls for profound reflection, as the new generations are loudly asking us to help make the world a better place. It was precisely this need that gave rise to the “Sustainability Plan 2020-2030”, a ten-year project that we “gave ourselves” for our centenary and which is the result of an operation to set up and integrate activities already under way and planned, strengthened in a long-term perspective.

On the agricultural front – conclude the Moninis – we will create a green lung in the heart of Italy, investing in integrated and organic production and precision irrigation, while on the production side we will consolidate our commitment to high quality, as well as to the traceability of the bottle and packaging, which is always lighter and more ecological. Finally, in the area of food, we will strengthen our support to scientific research, the education of the younger generation and the promotion of a healthy lifestyle. These are our next objectives”.

Birthdays are milestones to celebrate, but also “occasions to reflect on one’s origins and one’s journey, trying to imagine the continuation of the journey.” This is the spirit in which Monini celebrates its first century of life: one hundred years of history and ten to write a new future, in the wake of sustainability.

In the year of its centenary, the company decided to adopt a concrete and detailed ten-year sustainability plan, starting from the earth to reach the culture of extra virgin olive oil, formalizing a focus on the territory and product quality as well as on the development in harmony with environmental, social and economic needs, which have been part of the company’s philosophy since the beginning.

Among the main commitments, we will be able to create a new green lung in Italy – by planting a million olive trees – and to cultivate the land according to organic or integrated farming techniques, but we will also consider the certification of products of Italian origin according to High Quality CEQ criteria, the traceability of every bottle of 100% Italian extra virgin olive oil through blockchain technology, support for scientific research and education of a million young people to a correct food culture.