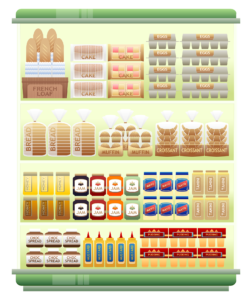 The use of renewable raw materials is today increasingly widespread, because it represents a good strategy in the framework of sustainable development. In fact, the new chemicals and materials for everyday applications are more often derived from biomass rather than from oil derivatives. Among the most frequently used biopolymers, there is polylactic acid (PLA), which is industrially produced in large quantities and with different purities. PLA is a biodegradable polyester derived from renewable sources, such as corn starch; it is produced industrially by polymerization of a derivative of lactic acid, which is available in large quantities from renewable sources. PLA was described for the first time in 1932, but only in 1960 it aroused interest for biomedical applications. In 2002 the first industrial production was launched, and today PLA is the most widely used bioplastic. Unfortunately, PLA has some disadvantages for use in the packaging sector, which are:

1) Its chemical properties are similar to those of polystyrene, but worse than those of PET;

2) Its thermal resistance is poor, and this causes problems during transport, storage and processing, as well as the deformation of containers in the packaging of food;

3) Its oxygen barrier properties are lower to those of nylon and PET.

It is well known that the chemical modification of a polymer is a good strategy to change its properties, and precisely in this direction have moved L. Genovese et al. to overcome the drawbacks of PLA and increase its use as food-approved packaging material. The authors of this study have prepared films in a copolymer with a triblock ABA architecture, where A is polylactic acid (PLLA), and B is an ad hoc synthesized biopolymer, based on succinic acid, and more precisely a copolyester containing propylene and neopentyl glycol succinate. Polylactic acid (PLLA) is a form of PLA resulting from the polymerization of L-lactide. Five different samples with a different A/B blocks ratio were prepared: 15/85; 24/76; 43/57; 46/54; 67/33.For the comparison, even the polymer containing only units of PLLA was prepared. The material synthesis occurred through following steps:

1) Synthesis of the B biopolymer;

2) Synthesis of the ABA copolymer;

3) Preparation of the films by means of compression molding. The copolymer ABA in powder was pressed with a Carver press at 40 °C, i.e. above the material melting point. In the press, the molten material was subjected to a pressure of 2 tonnes for 2 minutes. At the end, the films were cooled to room temperature in the mold, while keeping them constantly under pressure;

4) Storage at room temperature for one month to reach a perfect state of balance.

To highlight the different properties between the blocks A and B, the samples under study were then characterised as follows:

1) The thermal and structural properties depend on the ratio between the two blocks. In particular, for a (PLLA) ≥ 24 %, materials are semi-crystalline like the polymer containing only units of PLLA, but show lower melting temperatures with respect to PLLA. On the contrary, the copolymer with A/B = 15/85 is completely amorphous and with this A/B ratio it was not possible to produce films.

2) As for the mechanical properties, the introduction of B segments along the PLLA chain leads to an enormous decrease of the elastic modulus in the final material: for the 43/57 copolymer, the reduction almost reaches two orders of magnitude, whereas for the copolymer 67/33, it is 6 times lower than that of pure PLLA. These values show that with the adopted copolymerization a more flexible material can be obtained compared to the polymers currently used for packaging purposes.

3) The barrier properties were investigated in order to assess the permeability to oxygen, nitrogen and nitrogen oxide of the films. The results obtained show that gas transmission is affected by the copolymer composition, since the gas transmission speed is lower with the increase of the content of block A, due to an increase in material crystallinity. Also worth noting is that the ABA copolymer – regardless of the A/B ratio – shows better permeability with respect to other materials commonly used for packaging (PP, LDPE, HDPE and PCL).

4) Degradation tests were performed at room temperature (23°C) by placing film samples (diameter 16 mm, thickness 0.2 mm) between two layers of compost (20 g each) in a vessel protected from light for 21 days. The samples were retrieved from the compost, washed and dried, and then weighed before incubation, at predetermined intervals, until their weight was constant. The composting tests were performed using fresh food wastes, aged food wastes and compost, to determine the effect of different bacteria and different bacterial activities on the compostability of samples. In particular, fresh food wastes are characterized by a higher degradation activity, and contain a different bacterial population with respect to the other two compost types. The results show that after 21 days, pure PLLA is not subject to a loss in weight. ABA copolymers, on the other hand, are subject to a loss in weight that progressively increases with the incubation time; in particular, after 21 days of incubation, the molecular weight of the material is almost halved in food wastes, with a biodegradation percentage that varies depending on the composition of the copolymer, and in particular decreases with the increase of the content of block A. This may be explained on the basis of the different crystallinity of the samples, because the enzymes secreted by the microorganisms attack preferentially the amorphous areas B of the material, which are less packed and more accessible. To sum up, the main results of this study consist in having perfected the design of new block copolymers ABA, based on PLLA (unit A) and a copolymer containing succinic acid (unit B). ABA copolymers have better thermal, mechanical, and barrier properties compared to pure PLLA, and the presence of the central B block in the main polymer chain facilitates the process of compostability. Finally, by varying the A/B ratio, it is possible to modulate the material properties for specific purposes.

FT System, innovative solutions to guarantee the quality and safety of food products